Ayahuasca experiences often transcend articulation as we search for words that capture the inexpressible. Ayahuasca art is a way to capture these experiences in beautiful ripples of connection, often mirroring the experiences of others. Making art not only validates the visionary experiences that ayahuasca brings, but can also help us integrate them.

The work of indigenous ayahuasca artists reminds us that there is deep spiritual meaning in the visual images we bring back from our travels. While most of us are not artists, at least not in a formal sense, we can still see artists’ renderings and recognize landscapes, motifs, recurring images, colors, and textures that transcend language. When words are not enough, visionary art lends itself as a channel.

The Origins of Ayahuasca Art

The foundations of the art of ayahuasca lie in the sacred significance of the beer and the ability to reveal deeper states of consciousness. The ayahuasqueros or curanderos (plant healers) who impart their wisdom to an ever-increasing number of Western tourists (and celebrities) come from a background where herbal medicine is intertwined with their communities, informing both cultural pursuits and creative.

But who were the originals?

Research suggests that the Tukanoan people were the first to prepare and use ayahuasca. Sitting quietly along the banks of the Putumayo River in southern Colombia, Tukanoan shamans took the symbols that presented themselves during ayahuasca visions and communicated them to community members through carvings in the sand or markings on the walls of buildings.

In the 1960s and 1970s, anthropologist Gerardo Reichel-Dolmatoff amply illustrated how central ayahuasca was to Tukanoan culture. Ayahuasca informed everything about the tribe, supporting the Tukanoan understanding of how the world was created, how diseases are contracted and cured, and what are the pillars of living a happy and fulfilling life. In connection with this broad cultural influence, the anthropologist wrote several books on the Tukanoan art of ayahuasca and shamanism.

The Tukanoan people used ayahuasca in every aspect of their community, for spiritual, educational and healing purposes. Sun, moon and milky way motifs are present in their ayahuasca symbols – and these often still appear as central images in all ayahuasca art in general.

Visionary contemporary artists draw from the Tukanoan line. Rendering the invisible and giving meaning to the mystical, they paint dreams, fears and seemingly unfathomable visions into physical forms.

If you are new to ayahuasca art, here are five amazing artists to act as your gateway.

“Unai Shipash” (Muses of Time and Space) by Pablo Amaringo

Pablo Amaringo’s visionary art, intricate, captivating and filled with the supernatural, is undeniably the blueprint for contemporary ayahuasca art. Amaringo was a master communicator of both myth and material. Entirely self-taught, his work describes the visions he received during his time as an ayahuasquero (plant healer). They capture spirits, underwater cities, heavenly realms, wizards in battle with shamans, Amazonian landscapes and more, all inspired by the ayahuasca experience.

In 1988, Pablo founded the Usko Ayar Amazonian School of Art in Pucallpa, dedicated to depicting and preserving the indigenous knowledge of Amazonian traditions. The works produced by the school have been credited with creating what we now call ‘New Amazonian Art’. 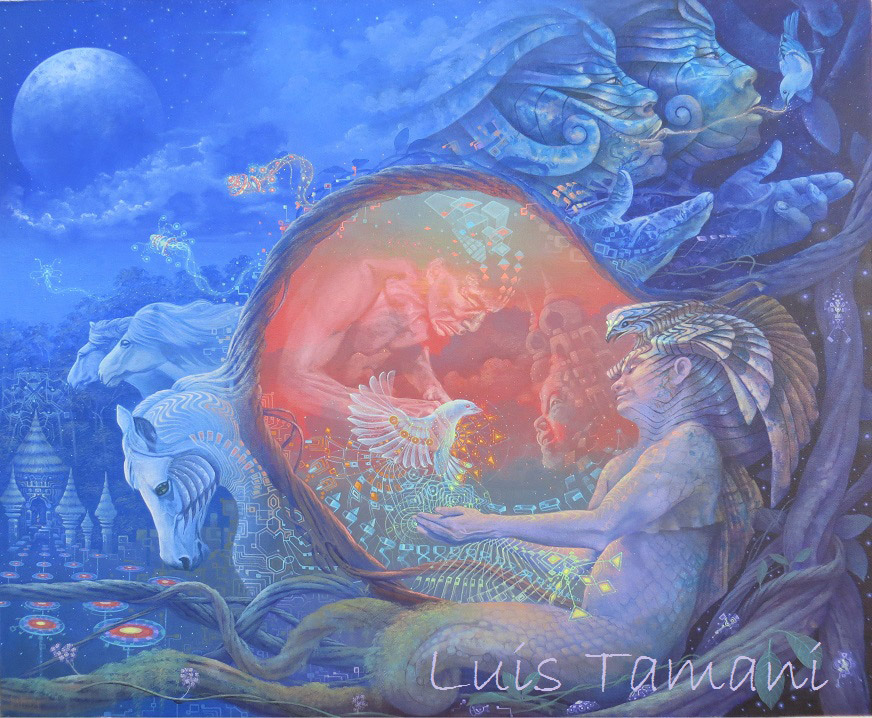 “From the Ayahuasca Heavens” by Luis Tamani

While Pablo Amaringo is the creator of the Neo-Amazónica style of ayahuasca art, Luis Tamani can be considered one of the creators of what he refers to as “Conscious Art” of the 21st century. His style deviates from the folkloric inspirations of the self-taught Amaringo, as Tamani is formally educated and was an abstract artist before ever experiencing sacred plants. Born in 1983 on the banks of the Ucayali River in Pucallpa, Taman’s imagination was informed by lush landscapes of winding rivers, trees, lianas, animals and birds, all against the verdant backdrop of the Peruvian rainforest.

Explore his gallery and support his work here. 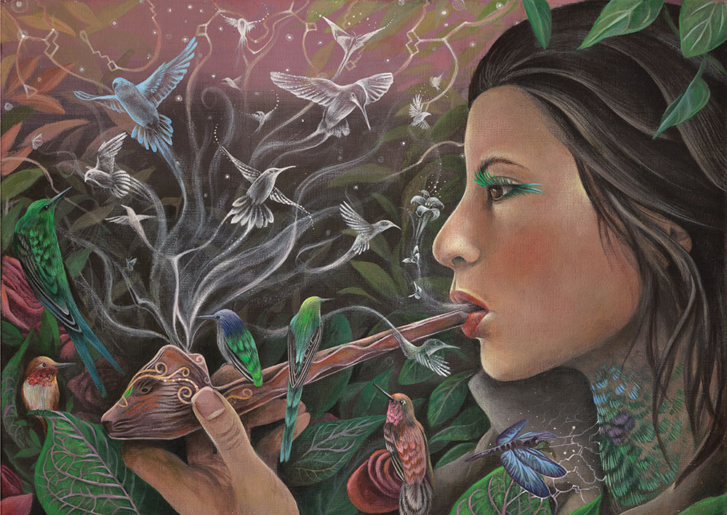 As we become more and more globalized and knowledge from indigenous cultures and access to ayahuasca increases, we are graced with more ayahuasca artists. One of those examples is Li Lian Kolster.

A Taman student, formerly self-taught Li Lian Kolser left England for the Amazon in 2013 to study herbal medicine. As a result, her work is deeply ayahuascarian, mixing birds, plants and biography. Through her training under Taman, she strikes a balance between technical precision and flashes of the divine.

Today, Kolset travels extensively and exhibits her work internationally. In 2017 she became an instructor at the Vienna Academy of Visionary Art to share the traditions of ayahuasca art throughout Europe. Every year, she makes a pilgrimage to Peru to paint and further open her world through traditional plant medicine.

Buy prints of her paintings here 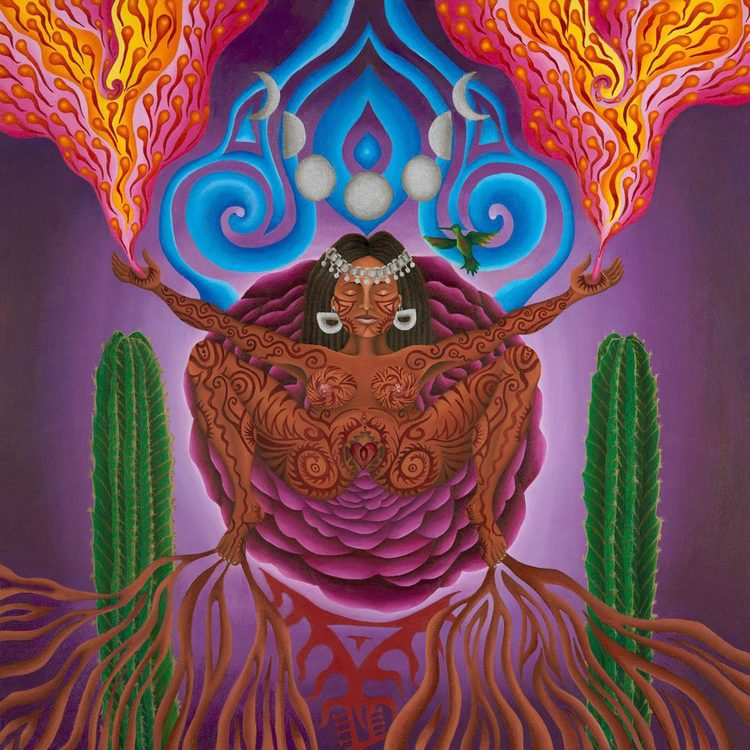 “The Return of the Divine Feminine” by Mariela de la Paz

A mestiza born in Chile, artist Mariela de la Paz summons the natural world, Latin America, and the landscapes of our emotional lives into an art form that is all her own. Drawing inspiration from indigenous herbal medicine, Mariela’s paintings showcase all the otherworldly wonders we can see, feel and touch in this earthbound world with the help of an entheogenic drive. It is identified with the visionary art form of “darshan” because those who have the pleasure of contemplating the paintings receive a blessing.

Her paintings are conceived with technical skill, polished with grace and delivered with a divine feminine flourish. Or, as she articulates on her website, she produces art that is “tribal, earthy and honorable[s] the feminine principles of ancient matriarchal traditions.”

Shop her Women of The Earth series.

Natural colors and acrylic are synchronized on canvas and ‘llanchama’, the fibrous bark of the ojé tree, in the works of indigenous Peruvian artist Brus Rubio. In his visionary art, artist Murai-Bora shares the mythology, history and culture of the Bora and Huitoto peoples and offers a fascinating glimpse into the cosmology of the Amazon Basin tribes.

Rubio’s ultimate goal is to “Mazonize cities, institutions and people” by disseminating Amazonian knowledge and creating arenas of cross-cultural encounters to spark discussions on cosmopolitanism and world-making.

His paintings also act as a catalyst for these discussions. Interweaving visionary states with the natural world, in Rubio’s art leaves look like leaves, but embedded in the leaves are feathers, birds with human bodies and other oddities that our minds whisper “shouldn’t be there”; but our heart, when we contemplate them, cannot but feel that they are perfectly placed.