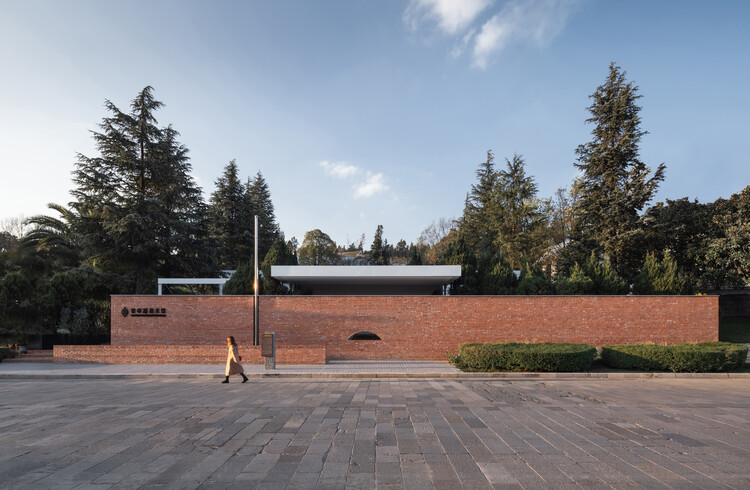 Text description provided by the architects. The World Horticulture Expo was held in the “spring city” of Kunming in 1999 under the theme of “Man and Nature-Marching into the 21st Century”. The ’99 Expo has had a profound and lasting impact on the growth of Kunming as a city, and the development of the tourism industry in Yunnan Province, and stands as an unforgettable memory for a generation of Kunmingers. Twenty-two years later, the 15th Conference of the Parties to the United Nations Convention on Biodiversity (COP15) is being held in Kunming. On this occasion, the Kunming Contemporary Gallery selected a vacant site within the original Garden of the World Horticultural Exposition for an artistic revitalization project, to build a small art museum dedicated to the art of Zeng Xiaolian, a long-time scientific illustrator for the Institute Kunming of Botany. , Chinese Academy of Sciences.

The project is located on the northern side of Friendship Road Expo Gardens, on the sites of the former gardens of Pakistan and Vietnam. The conception of the layout of the museum began with the thought of how to conceive the “pre-existence” of the site. While much of the exhibition architecture is removed from its setting and surrounding cultural context, our first impression of the gardens of Pakistan and Vietnam was quite vivid: stepping on weathered red bricks, touching cracks in the marble, seeing the shadows of columns and fallen trees. from the strong rays of the sun. This wealth is the result of a long period of natural growth, which has given the area a sense of historical memory.

We define “pre-existence” as the preservation and persistence of the “new legacy”: the previous content as a historical thread has not been removed and remains readable, while the newly written content becomes a new image layer superimposed on a part. of tracing paper over the original – the old and the new are carefully piled together, the past and the present connected but not mutually interfering with each other. The steel structure met the need for rapid construction while also minimizing the impact on the surrounding environment. Not a single tree fell in the final plan, while the original open-air pavilion, stone slabs, marble banners, wall niches and stone benches of the Pakistan Pavilion were preserved in their entirety and integrated into the museum.

Red bricks are used in the interior as exterior flooring materials and extend to the exterior. The viewing frames facing the courtyard are opened sparingly between the paintings, and the boundary between interior and exterior is blurred. Simultaneously visitors pass through indoor, outdoor and semi-outdoor space while visiting and observing the paintings.

While most walls are raised from the floor, the walls of this museum are suspended from the steel structure that rests above, and the lower part of the walls simply needs to be connected and fixed to the ground to avoid the excavation of strip foundations or earth beams. The curves and intersections of these light hanging walls form the rich interior and exterior spaces.

If the original art gallery is a floating entity, wrapping around a curtain ring, its boundary is shifted. A new advantage emerges that abstracts and filters the natural environment, and also generates layers between the primitive vegetation and the new landscape design, so people can travel even within the two layers of the system. The shadow breaks through the curtain and is projected onto the wall, and it is not clear whether it is a leaf or a branch. It is the presence of the medium that translates sunlight, trees, wind and time, and this is an aesthetic painting that belongs only to this scene.